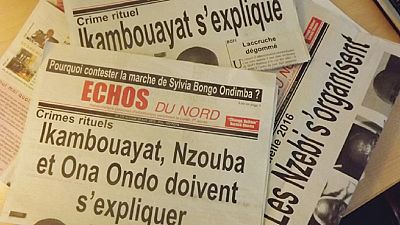 Several people were arrested Thursday morning at the headquarters of the Gabonese opposition newspaper Echos du Nord (Echos of the North) in the capital Libreville.

It is reported that plainclothed gunmen entered the newsroom as journalists in the triweekly paper were working on the Friday edition.

“They picked all of them, twenty people. They were armed with automatic guns,” Kombe-Wilfried Nziengui, a journalists who said he managed to hide, told AFP.

According to the country’s communication minister, nine people were arrested for questioning as part of an investigation.

Alain-Claude bile-By-Nze said the investigation is on an article published on Wednesday about an “impending military coup” after the disputed reelection of President Ali Bongo Ondimba.

The headline of the article was about the arrest of the head of the Directorate of Documentation and Immigration (DGDI, former CEDOC, intelligence services also responsible for residence permits issued to foreigners), General Célestin Embinga.

The information provided by the minister was denied by other media in the country.

Those arrested, journalists and administrative staff, “were taken to CEDOC”, the director of publication, Désiré Ename, told AFP from Paris where he claims he has been in exile.

The opposition newspaper regularly described the ruling government as a “military-coup junta.”