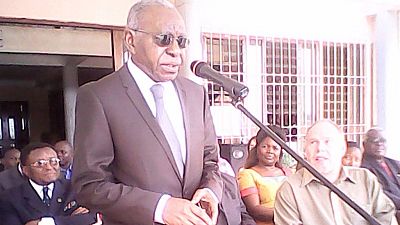 Mboumoua died at the age of 83 in the Cameroonian capital, Yaounde on October 26. He served as Secretary General of the Organization of African Unity (OAU) for four years, between 1974 – 1978.

According to Zuma, it was ‘‘During his tenure Africa dismantled Portuguese colonial empire in Africa with the Independence of Guinea Bissau, Sao Tomé and Principe & Angola.’‘

Eteki Mboumoua was an accomplished diplomat, seasoned negotiator who steered the continental body thru the turbulent years of the mid-70s.

She added that he will be remembered for his invaluable contribution to the anti colonialism and apratheid fights, which at the time were key objectives of the OAU. The OAU was later turned to the African Union in 2002.

Etéki Mboumoua was succeeded by Togo’s then Foreign Minister, Edem Kodjo as OAU Secretary General in 1978. He served as Special Adviser to then President Ahidjo from 1978 to 1980, when Ahidjo resigned.

He served as Paul Biya’s Foreign Affairs chief from 1984 until he was fired in 1987 without any specific being given. He turned to humanitarian work after he left public service and went on to become head of Cameroon’s Red Cross (CRC). He also did some diplomatic work for the OAU as a political mediator in the Comoros in 1995.