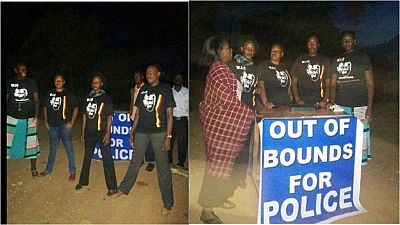 A female pressure group of the opposition Forum for Democratic Change (FDC) decided to take over the security of the house of party leader Dr Kizza Besigye who is under 24-hour surveillance by Ugandan police.

The Women-In-Command, wearing black t-shirts with Besigye’s face on the front with the inscription: He can’t Breathe – took control of security after the leader left the country on October 17 to “take a break from police harassment”.

Upon Besigye’s return on October 29, the over a dozen women group led by a district head Nyanjura Doreen clashed with police as they barricaded the road leading to Besigye’s house with a sign saying: “Out of Bounds for Police”.

Women-In-Command (WIC) are on night duty. Kayihura police came and were repulsed by the women- they retreated to the main road! Lol 4 WIC!! pic.twitter.com/ala7IOPgCd

They however lost the fight on Sunday when the police “forcefully” removed their barricades and arrested their leader as seen in the video shot by local television, NBS.

Dr Kizza Besigye’s house has been under lock by over a dozen police officers who have barricaded the entrance to prevent him from leaving the house without any surveillance.

This has been the case since the beginning of month when the police denied the request of the opposition group from holding a parallel celebration of the country’s independence anniversary on October 9.