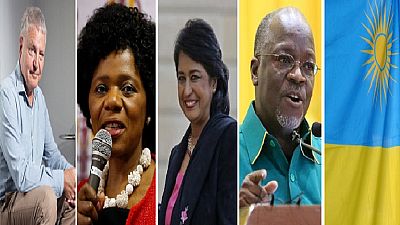 Forbes Africa have opened nominations for its annual ‘‘Person of the Year’‘ (POY) award. The award in its 6th year will allow people to vote from among five nominees.

Tanzanian President John Pombe Magufuli Forbes justified his nomination saying, ‘‘This Tanzanian president has had a significant hand in boosting the nation’s economy.’‘ Magufuli is nicknamed the ‘‘bulldozer’‘ for his strict approach to governance.

The other African leader nominated is Ameenah Gurib, Mauritian president ‘‘who is spearheading the drive to protect her nation’s environment,” Forbes wrote.

Gurib was listed by Forbes magazine in June this year as being the 96th most powerful woman in 2016.

South Africa’s immediate past anti-corruption chief, Thuli Madonsela is also listed – Forbes noted how she “faced death threats in her quest to bring inconsistencies to the fore.”

Then there is South African businessman, Michiel le Roux, founder of Capitec Bank – “who has made banking more accessible for South Africans.”

The people of Rwanda were also nominated for the ‘Person of the Year’‘ award. Forbes emphasized the strides and reforms the country has undertaken in recent years citing particularly the issues of gender equality.

Voting has been open and the final event is expected to be held on November 17. The first winner of Forbes POY award was former Nigeria central bank governor, Sanusi Lamido Sanusi, now Muhammad Sanusi II, emir of Kano.

2012 winner – James Mwangi, CEO of Equity Bank, Kenya
2013 winner – Akinwumi Adesina, the then Minister of Agriculture in Nigeria, now head of the African Development Bank.
2014 – Aliko Dangote, Chairman and CEO of the Dangote Group, Nigeria.
2015 – Mohammed Dewji, CEO of MeTL Group, Tanzania
2016 – Who will it be this year?