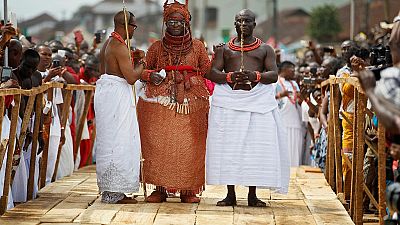 Thousands of people gathered to witness the coronation of the new king of the Benin people in Southern Nigeria.

The coronation of Oba Ewuare II carries on a royal tradition that has endured from around the 13th century until the British invasion hundreds of years later.

The ancient Benin Kingdom was famous for its vast wealth, sophisticated urban design and intricate bronzes.

Its ruler, the Oba does not wield any official powers in Nigeria, but has a great deal of influence.

The title is passed down from father to first-born son. The new king takes over from his father who died earlier this year.

“With international aid and private sector partners, we will save our heritage,” he said, promising in particular to invest in the bronze industry, the kingdom’s pride…I hope to attract tourists, help develop the agricultural industry,” Oba Ewuare II said.

The coronation was graced by Nigeria’s Vice President Yemi Osinbajo and business tycoon Aliko Dangote and a host of dignitaries.