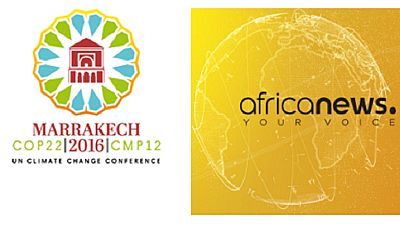 Africanews will be offering an extensive coverage of the Conference of the Parties (COP22) – online and on TV. We will start with a build up titled ‘Road to COP22.’

Our team will also file reports from Morocco when the event takes off. Africanews will also have a special tag page on our navigation bar for the next 7 weeks.

The Moroccan city of Marrakech will host the upcoming COP22 conference from 7 – 18 of November, 2016.

The COP which is the supreme decision making body of the United Nations Framework Convention on Climate Change is expected to lay emphasis on new ways of placing development and the civil society at the centre of the climate agenda.

A ministerial conference to prepare for the summit ended in Morocco with participants congratulating the international community for the recent major successes achieved in combating climate change.

The ministers equally discussed the means of the implementation of the Paris agreement before and after 2020, stressing the need to act as the world is witnessing increasing cases of extreme weather.

“Today one has an idea of how developed countries expect to mobilise this 100 billion; I mean both private and public contributions as well as sums dedicated for adaptation and mitigation,” Aziz Mekouar, Moroccan ambassador for multilateral negotiations of COP22 said.

Officials agreed during the meeting that the COP22 event in Marrakech will be a historic moment for people everywhere. COP22 will include the Marrakech Call to Action, to be made during the high-level segment featuring Heads of State and Government on November 15.

What is the COP?

The COP stands for the “Conference of the Parties.”

It is the supreme decision-making body of the United Nations Framework Convention on Climate Change (UNFCCC), opened for signature in 1992 during the Earth Summit in Rio de Janeiro and later entered into force in 1994.

Through this instrument, the United Nations has equipped itself with an action framework to fight global warming.