CAR: Bangui Archbishop honoured by his elevation to position of Cardinal 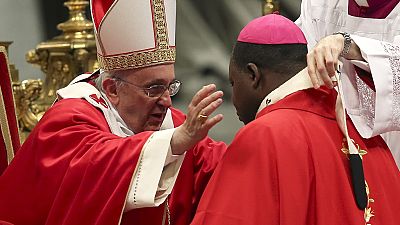 Dieudonne Nzapalainga, the Archbishop of Central Africa Republic’s capital Bangui, has said his elevation by Pope Francis to the position of a cardinal was an honour to the poor.

The Vatican on Sunday announced that Pope Francis had nominated 17 new cardinals even though only four of them are eligible to vote in a conclave to elect his successor. Dieudonne is the only African on the list.

The 49-year-old is the youngest among the new batch of cardinals to be announced. The Bangui archbishop welcomed Pope Francis to the CAR in 2015 when the Holy Father visited to appeal for an end to religious conflict.

Dieudonne Nzapalainga, Archbishop of Bangui, CAR, has welcomed being named by Pope Francis on Sunday as one of a group of 17 new cardinals. pic.twitter.com/Ci1UEdDcq4

The BBC Afrique quotes him as saying: ‘’[Pope Francis] came to a country of poor people and now he has called on a poor man to become cardinal. I am just going to continue with my mission that I have started with my brothers and sisters to bring back peace.

‘‘You all know that we want peace and there are tensions. There has been mass destruction, deaths. Maybe, Central Africans will take this as God’s love so we can get out of this cycle of hatred, revenge, destruction and death, and aspire to life.”

The archbishop together with Bangui’s most senior Muslim cleric, Oumar Kobine Layama, have led efforts to promote unity between followers of the two religious groups in the country.

Here they are, in the order in which Francis announced them from the steps of St Peter’s Basilica. They are:

Cardinals named on Sunday by Pope Francis who are over 80 and thus ineligible to vote in a conclave: