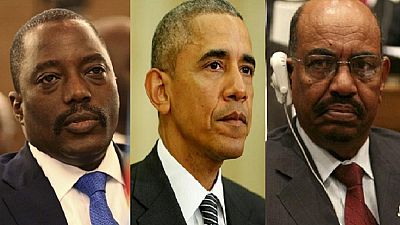 The United States has revealed that according to its resettlement program, two African countries -the Democratic Republic of Congo (DRC) and Somalia – are among the top 5 countries whose refugees it has helped resettle.

‘‘The refugees admitted under the program come from 79 countries. Over 70 percent fled five countries: the Democratic Republic of the Congo, Syria, Burma, Iraq, and Somalia, where protracted conflicts have driven millions from their homes.

‘‘Over 72 percent of the resettled refugees are women and children. Many are single mothers, survivors of torture, people who need urgent medical treatment, religious minorities, lesbian, gay, bisexual, transgender, or intersex (LGBTI) persons, or others imperiled by violence and persecution,’‘ a Department of State statement titled Fact Sheet: Fiscal Year 2016 Refugee Admissions said.

The US further noted that it received and has resettled 84,995 refugees in the Fiscal Year 2016, the figure is just five short of President Obama’s 85,000 target. Before this year, the US said it had resettled 70,000 refugees over the last several years.

‘‘The U.S. resettlement program serves refugees who are especially vulnerable; those who fled violence or persecution and cannot safely stay where they are or return home.

It is the largest refugee resettlement program in the world. For each of the past several years the United States has offered 70,000 refugees new homes,’‘ the statement added.

The US added that with the safety and security of the American people always the top priority, refugees are screened more carefully than any other type of traveler.

Screening within that context includes the participation of the Department of Homeland Security, the FBI, the National Counterterrorism Center, the Departments of State and Defense as well as additional intelligence agencies.

The top 5 U.S. States welcoming refugees were listed as California, Texas, New York, Michigan and Ohio. The US disclosed plans to help resettle some 110,000 refugees in the year 2017.

The DRC has descended into a state of political turmoil over the need to organize elections as the tenure of incumbent Joseph Kabila comes to an end later in December. The electoral body has estimated that elections can only hold latest by 2018.

The body says there is the need first to compile a voters register before it needs another 500 odd days to organize the polls. Kabila has been given legal permission by a court to continue in office if polls do not hold this December.

He is barred from contesting in the next elections whenever they are held and has not declared any intentions of changing the constitution to allow him to stand.