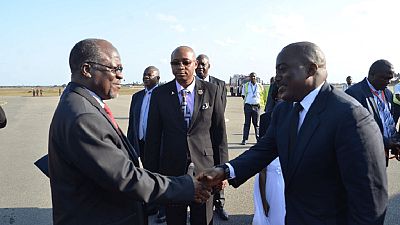 The Democratic Republic of Congo and Tanzania have signed a memorandum of understanding to jointly explore the petroleum potential of Lake Tanganyika which sits across both countries.

The agreement was signed on Tuesday in the capital Dar es Salaam in the presence of Tanzanian President John Magufuli and Congolese President Joseph Kabila who is in the country on a three-day official visit.

“We have already discovered oil in the western parts of Lake Albert, and there’s a great possibility that there’s also oil in Lake Tanganyika, therefore, joint exploration is the way to go for mutual benefits,” President Kabila said at a press conference.

Kabila added that they discussed mutual cooperation in using a pipeline being constructed from Uganda to Tanzania to export Congo’s oil from Lake Albert in the future.

Lake Albert, like Lake Tanganyika is located on the border between Uganda and the DR Congo and is estimated to have a multi-billion barrel field which will prove to be the largest onshore field found in sub-Saharan Africa for more than twenty years.

President Magufuli was optimistic that through such agreements, African countries can make use of their economic potentials.