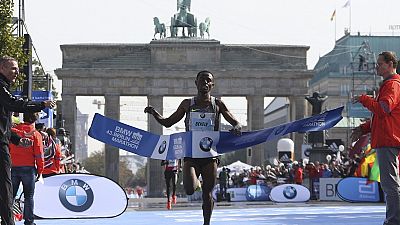 Coming up on #AfricaLive with LindyMtongana Ethiopia's Kenenisa Bekele wins the Berlin marathon but falls short in his world record quest pic.twitter.com/oE5nGXKEfv

Bekele produced an exceptional performance in the second fastest race of all time after finishing in 2:03:03 just short of Kenya’s Dennis Kimetto world record of 2:02:57 set in 2014.

Did you see this John Gray ?… https://t.co/G2MCAMGDNQ

Bekele’s time was an Ethiopian national record and he took two minutes off his personal best.

#PartofOne42 Kenenisa Bekele wins with an Ethiopian record and a world leading 2:03:04, Wilson Kipsang follows in 2:03:13.

“After a long-time injury coming back to the first time it was fantastic. You know for me, it’s maybe my future is started here again for the next season. So I’m really glad, I’m very happy to be here and join this race,” he said.

Bekele and Kenyan Wilson Kipsang led an elite group of seven runners, which was ahead of the world record pace at the halfway stage.

However, Kipsang had to contend with second position after finishing the race at 2:03:13 while fellow Kenyan Evans Chebet came in third at 2:05:31.

In the women’s race it was an all Ethiopian affair at the podium finish after Aberu Kebede won her third Berlin title in 2:20:45 ahead of fellow country mates Birhane Dibaba at 2:23:58 and Ruti Aga at 2:24:41.