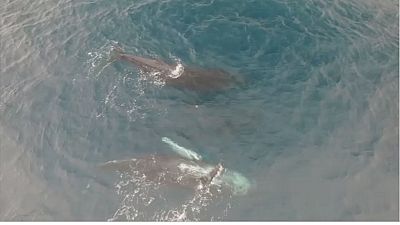 Every year more than 7,000 humpback whales come from the Antarctic and travel 5,000 km to reproduce off the coast of Madagascar. The humpback whales would be between 4000 and 8000 in the Indian Ocean. Their migration journey takes many areas of shade.

Since four years ago,Scientists have undertaken to establish a bank of genetic data. For this, biopsies and crossbow are performed to harvest more than 2 cm of skin and fat.

“We take into account the trajectory of the animal, to prepare for the different behavioral changes, the different changes in movement of the animal. It is always tough emotional to recover these two centimeters and say “ it hurts? Is it being done well?” said Marchesseau, veterinary student in animal behavior.

Nearly 400 whales were listed genetically in Madagascar. The scientific work has helped to implement a code of conduct for the tourist boats on the big Island. The approach distances had reduced to 100 or 200 meters, time of observation of a maximum of one hour, or prohibition of swim , at Sainte-Marie, science is at the service of the conservation.

“The Mothers make a very small sound that has a very low frequency that are really sensitive to noise that will make the engines of vessels, including the tourist boats. Therefore, our research will serve to amplify, fortify the respect of this law in Madagascar” said Anjara Saloma, Scientific Leader at CETAMADA Association.

The Big Island is a conducive place for the behavioral study of whales. Easy to observe and to approach, their presence is a sign of good health for the oceans.

Each year, dozens of scientists go to Sainte-Marie like the team from Montpellier, in France. Nobody knows, If the whales communicate with their sounds or are able to perceive the tastes and odors. For the first time in the world, researchers are trying to drill this mystery.

“One of the interests of this study would be to know if we can find the molecules that could push the cetaceans of danger areas for example, areas where there has been oil spills or intense maritime traffic zones where they could be collisions with vessels” said Bertrand Bouchard Doctoral student, in Behavioral Ecology, University of Montpellier.

Because of the intensive hunting and pollution, the Humpback Whales were endangered there were only 10% of the aminal in existence.

Today, their number is estimated at 80 000 in the world and increases each year. If the Humpback Whales are no longer classified among the species in danger, their survival always depends on the programs of protection and conservation.