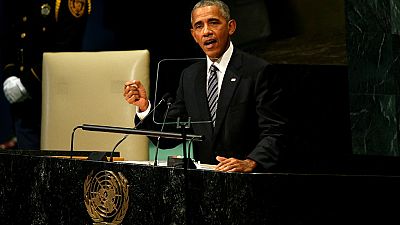 Ethiopia is pleased with the fact that United States (US) President, Barack Obama, has praised their role in hosting and supporting refugees as well as efforts to improve their conditions.

Ethiopia is currently sheltering more than 800,000 refugees out of the over 65 million people, roughly 1 percent of world’s total population, displaced worldwide.

The US president was addressing a panel organized on the sidelines of the 71st United Nations General Assembly meeting being held in New York. Ethiopia was mentioned twice throughout Obama’s address.

The vast majority of refugees are hosted by just 10 countries who are bearing a very heavy burden -- among them Turkey, Pakistan, Lebanon, Iran, Ethiopia.

According to Obama, the role that countries like Germany, Turkey, Canada, Sweden and Ethiopia are playing in sheltering refugees and helping them with access to humanitarian assistance is exemplary to others.

‘‘It’s a test of our international system where all nations ought to share in our collective responsibilities, because the vast majority of refugees are hosted by just 10 countries who are bearing a very heavy burden — among them Turkey, Pakistan, Lebanon, Iran, Ethiopia. Countries that often have fewer resources than many of those who are doing little or nothing,’‘ Obama said.

President Obama about Ethiopia at the Leaders Summit on Refugees at #UNGA DrTedros TayeAtske POTUS pic.twitter.com/1ThwuxuUz8

He again thanked Ethiopia for bearing the refugee burden despite difficulties, ‘‘I want to personally thank Chancellor Merkel and Prime Minister Trudeau, and the people of both those countries — because the politics sometimes can be hard, but it’s the right thing to do.  And Ethiopia, which as was noted in the video, bears an enormous burden,’‘ he added.

At the panel Ethiopia, Canada, Germany, Jordan, Mexico and Sweden shared their experiences in sheltering large number of refugees and activities to improve their conditions.

Ethiopian Prime Minister Hailemariam Dessalgen said they will continue to provide shelter to refugees and activities to improve their condition.

He added that as part of its plans, the government is providing the chance for refugees to get access to education and engage in income generating activities including agriculture.

‘‘The government is facilitating conditions to make refugees get access to 30 percent of job opportunities to be created in various industrial parks, as part of improving their condition,’‘ he is quoted to have said.

World leaders are discussing ways of tackling the growing global migration crisis, the biggest migration crisis in which the number of displaced people surpassed those of World War Two, at the 71st UN General Assembly being underway in New York.