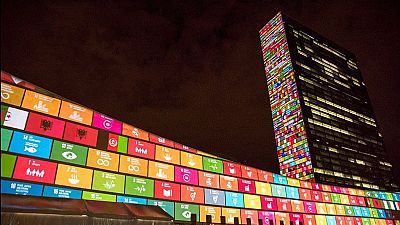 World leaders are trooping to New York in the United States of America for the 71st General Assembly of the United Nations which opened on September 13, 2016.

Heads of State, Heads of Government and representatives of the 193 UN Member States will participate in the events starting Monday, September 19 with a Summit for refugees and Migrants and then from September 20 to 26, will be the general debate where the leaders will speak on the subject: The Sustainable Development Goals: A Universal Push to Transform our World.

Cameroonian president Paul Biya is already in New York after leaving Yaounde on Friday. He was accompanied by his wife.

Kenyan Vice President William Ruto will represent President Uhuru Kenyatta at the general Assembly. He is already in New York after arriving on Sunday.

In New York for the #UNGA where issues on refugee crisis, sustainable dev, US-Africa bus, among others will feature. pic.twitter.com/yDSuxr8bCY

Nigerian president Muhammadu Buhari has also landed in New York on Sunday for the Assembly.

President MBuhari has arrived New York ahead of the opening of the High Level Segment of #UNGA . #NigeriaUNGA pic.twitter.com/JSpaIh7Ay6

In New York for UNGA.+ + going to be busy week!

Senegalese president Macky Sall passed through Canada for the 5th Global Fund Conference against AIDS held in Montreal. He is expected to cross the border on Sunday to New York for the General Assembly.

Zimbabwean president Robert Mugabe is expected to be in New York from Venezuela where he participated in the Non-Alligned Movement Summit. Mugabe will face a #ThisFlag demonstration led by Pastor Evan Mawarire in New York against his regime.

#ThisFlag Protest march UN General Assembly in NY from 17-22 Sept 2016. Mugabe will b there. No ZRP, NO Teargas! pic.twitter.com/siQxzm3nIP

Among the issues to be tackled are finding a solution to the global refugee crisis, the threat of antimicrobial resistance, implementation of the Paris Agreement and the 2030 Agenda for Sustainable Development to end world hunger.

Get to know Peter Thomson of Fiji (ThomsonFiji) who took the oath of office as new #UNGA UN_PGA this week. pic.twitter.com/Kuj35LwXsw

“But make no mistake, the great majority of humankind has yet to learn of the Agenda; it has yet to embrace the 17 Sustainable Development Goals, that if successfully implemented will bring an end to poverty and secure a sustainable place for humanity on this planet,” he said.

Outgoing Secretary-General Ban Ki-moon also called for the implementation of the SDGs and the Paris Agreement. “This first year is crucial. It is a time when all Member States should align their policies, programmes and spending behind the 17 goals,” he said.

Ban noted that his successor, the ninth UN Secretary-General, will be introduced on January 1, 2017.