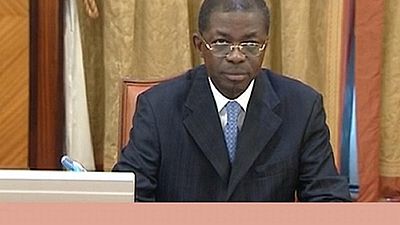 Gabon’s former justice minister, Seraphin Moundounga, has spoken about an assassination attempt on his life. He also disclosed impressing on incumbent Ali Bongo to accept a recount of the ballots in the hotly contested polls.

In an interview with Radio France Internationale, the minister who has since fled to France after his resignation related how assassins stormed his house.

According to him, powers that did not agree with his decision to resign were behind the plot to kill him on the night of 6 – 7 September, a day after he had announced his resignation.

Mr Moundounga also said he tried to convince Ali Bongo to accept a recounting of votes & following this resigned https://t.co/hNYKunNWO1

He related that the five assailants were dressed in civilian clothes and hooded. They handcuffed his security before they broke the CCTV system, taking the recorder. He notes that they ransacked his room without touching any other rooms.

Moundounga who was absent at the time said the fact that nothing was stolen by the assailants is what makes it a clear case of an assassination attempt and not a burglary.

He resigned from the government amid opposition protests days after the electoral body announced the reelection of Ali Bongo as winner of the August 27 polls. He cited the government’s lack of concern about the unrest following the announcement of election results as his main reason for resigning his post.

“Having noticed that the government was not responding to concerns about the need for peace and for the consolidation of democracy, I decided to step down from my functions as a member of government,” he said.

From his base in France, he is urging that members of the Constitutional Court must enjoy protection of an international force ahead of the appeals of candidates Jean Ping and Ali Bongo challenging fraud in the elections.