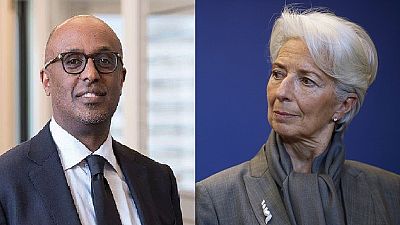 The International Monetary Fund (IMF) has appointed a new head for its African department.

Ethiopian Abebe Aemro Selassie succeeds Liberian Antoinette Sayeh in the role and is expected to begin his work in this capacity coming Monday, September 19, 2016.

His appointment was announced in a press release in which IMF boss Christine Lagarde, spoke highly about Abebe’s competence and the level of experience he brings to the department which the IMF values.

The IMF remains deeply committed to serving our members in Africa. Abe will bring a unique blend of extensive knowledge and experience to his new position as Director of the African Department.

“The IMF remains deeply committed to serving our members in Africa. Abe will bring a unique blend of extensive knowledge and experience to his new position as Director of the African Department,” Ms. Lagarde said.

“Abe brings a profound understanding of the challenges facing Africa, having worked closely with policymakers from across the region for much of his career.

‘‘Having had the opportunity to work with Abe over the last five years, I have been struck by his sound judgement, integrity, and commitment to teamwork,” she added.

Before joining the IMF, Mr. Selassie worked for the Economist Intelligence Unit, specializing in sovereign credit risk issues, and then for the Ethiopian government as Principal Economist in the Office of the President.

He holds a B.A. in Economics from City of London Polytechnic and a Masters in Economic History from London School of Economics.