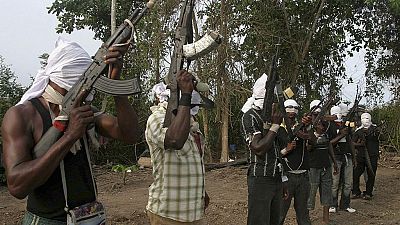 Nigerian president Muhammadu Buhari has cast doubt on the announced ceasefire of the militant group Niger Delta Avengers (NDA) who recently announced their readiness to engage in talks.

On the sidelines of the sixth Tokyo International Conference on African Development (TICAD VI) Summit in Nairobi, Kenya, Buhari told the media on Sunday that the government does not believe the militant group.

“We do not believe that they (the militants) have announced ceasefire,” President Buhari’s official spokesperson, Garba Shehu, quoted him.

23. ‘‘We do not believe that they (the militants) have announced ceasefire.”

The president added that the government is trying to “understand them more. Who are their leaders and which areas do they operate and other relevant issues”.

However, Buhari said the government is also open to dialogue to resolve all contending issues in the area.

22. On the militancy in the N/Delta region, the President said the FG is also open to dialogue to resolve all contending issues in the area.

In a statement distributed to the media on August 20, 2016, the NDA said it has undertaken to “continue the observation of our unannounced cessation of hostilities in the Niger Delta against all interests of the multinational oil corporations”.

It added that it will support a collective negotiating team from the Niger Delta “to engage with the federal government of Nigeria, representatives from the home countries of all multinational Oil Corporations and neutral international mediators.”