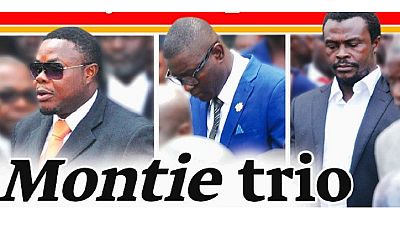 Ghana’s president John Mahama has reportedly remitted prison sentences handed by the Supreme Court to three persons who threatened to kill judges on a local radio station, Montie FM in the capital, Accra.

The three popularly referred to as Montie 3, were jailed by the apex court late last month after pleading guilty to charges of contempt. They were sentenced to four months in jail each with an additional fine of GH¢10,000 (equivalent to $2,500)

Reports from the Ministry of Communications late Monday night indicated that the three, radio programme host Salifu Maase (alias Mugabe) and his two panelists, Alistair Nelson and Ako Gunn, had been pardoned by the president and were to be released this Friday, 26th August 2016.

Presidential decision with advice of council of state

The ministry further notes that the president’s decision was in consultation with the Council of State, the highest constitutional advisory body to the president.

Communications Minister, Dr. Edward Omane Boamah in a statement added that it was in exercise of President Mahama’s constitutional powers under Article 72 of the 1992 Constitution.

The Communication Minister’s statement said apart from the convicts having served part of the prison sentences imposed on them, they have also paid the GH¢10,000.00 fines.

Events leading to, during and after their sentencing split opinions in the country. While the ruling NDC pushed for the president to pardon them, the main opposition New Patriotic Party (NPP) and other opposition parties largely disagreed with the move.

Beyond the political split, lawyers in the country also clashed in the media with each giving their own interpretation of why the top court was wrong or right in its ruling adding whether it was proper for the president to act a certain way despite the petitions.