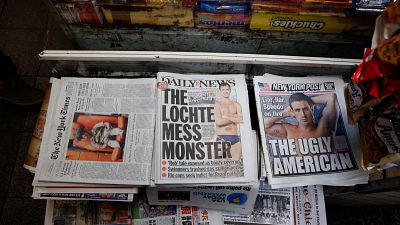 Two US Olympic swimmers are on their way home in disgrace after an incident that has embarrassed the host city, angered the police and government, unleashed a storm on social media, and dominated news coverage.

Jeered and called “liars” and “fakes” by a crowd at the airport, Gunnar Benz and Jack Conger flew home after Brazilian police said they had made up a story about being robbed at gunpoint on Sunday.

The US Olympic Committee issued a public apology for the men’s conduct. Four swimmers in total were involved, one of whom vandalised a petrol station’s bathroom after the men asked to use it. The USOC, having backed them, now confirms the police accusations.

Gold medallist and one of the biggest US swimming stars Ryan Lochte is already back in America and has been the most outspoken about the robbery. Gold medallist Jimmy Feigen is the final member of the sorry posse, and has changed his story to reclaim his passport.