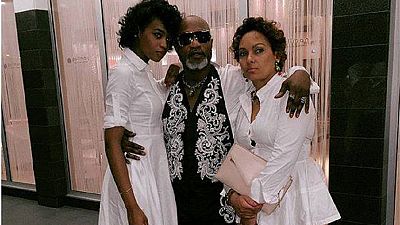 Embattled Democratic Republic of Congo (DRC) musician Koffi Olomide has posted a song dedicated to women on his facebook page, weeks after he was arrested for kicking a female dancer in Kenya.

The song titled “Mom-sorry” has a chorus of “Mama pardon” – French phrase for ‘sorry mom,’ as Olomide is heard singing at some point saying “forgive me.” Apparently an apology for the assault that got him arrested, deported and charged in court in less than a week.

The musician referred to as the King of Congolese rumba was deported from Kenya to the DRC on the instructions of the Kenyan police chief after he had spent the night behind bars at the Jomo Kenyatta International Airport (JKIA).

Days after his return to the DRC, he was picked up at his Kinshasa home and hauled before court. Olomide was charged with assault and battery and was detained in jail.

He was granted bail after spending four days in jail. His Kenyan show and another in Zambia were cancelled after the bad press that followed his arrest and deportation. He held his first post-detention show in Brazzaville, the capital of neighbouring Congo Republic a day after his release on bail.

Calls for his arrest and trial were championed by a Congressman Zakarie Bababaswe, who filed a petition on behalf of the Congolese public to have the musician punished for assault.