Paxful announces a third school to be #BuiltWithBitcoin

Starving in the midst of plenty: The sad tale of Lesotho's drought

High above lake Katse in Lesotho is a community bearing the brunt of the El Nino induced drought that has engulfed most parts of southern Africa.

Lesotho, a land locked country within South Africa hosts the continent’s second biggest dam which is built on lake Katse.

But in the abundance of the water used to produce electricity, (which is exported to South Africa), are a people whose livelihoods have been greatly affected because they cannot utilize this great water body as they would have preferred.

It's very annoying. All that water could serve us. We could irrigate our crops with it when there's drought. But that is not the case.

“It’s very annoying. All that water could serve us. We could irrigate our crops with it when there’s drought. But that is not the case,” said 65-year-old Mohlakoana Molise, a farmer.

Molise’s harvest for the season was just 2 bags of maize instead of the usual twelve bags.

“By September, there will be nothing left for us and I do not know how we can buy food at the store,” he said.

But lake Katse is also feeling the brunt of the El Nino phenomenon as its levels have reduced.

During its construction in the early 1990s (it was completed in 1996), the valley got flooded to the point that it earned Lesotho the nickname the ‘water castle’ of South Africa.

Molise said at that time, they were able to grow sorghum, beans and vegetables. But now, the entire valley “has become a desert” he bemoaned.

Whereas crop cultivation has being dealt a heavy blow as a result of the drought, animal rearing has somewhat managed to thrive.

Animals like cattle at least still get some fair amount of water to drink from puddles left behind as the water bodies dry up. Some are also taken to the steep side of the dam to get water.

Access to potable water on the other hand, has become a difficult task for the residents of the village of Sephareng further complicating the lives of the people.

“This drought is really terrible, especially for pregnant women” said Ntoaesele Mashongoane, a shepherd who herds cattle for a farmer who pays him at the end of the year with a cow.

Like other residents of the community, the pregnant women have to travel long distances to get water as well as food rations distributed by the World Food Programme.

Manthabiseng Motsomotso told the AFP that: “We depend on these gifts for our survival because we have nothing. Because of the drought we have nothing and we have no fields.”

A situational report on the drought situation in Lesotho provided by the UN’s humanitarian affairs agency, OCHA, as of July 25 2016 indicated that about half of Lesotho’s rural population are at risk of food insecurity between May 2016 and April 2017.

The report also indicated that nearly 477,000 people in Lesotho, out of an estimated 679,000 affected people require life-saving and livelihood protection interventions in the next 9 to 12 months.

A further 202,595 people will also require only emergency livelihood support in the same period.

But there might be good news on the horizon as the OCHA situation report notes that Lesotho has a 55-60 percent likelihood of experiencing the La Nina phenomenon which will result in normal and above normal rainfall in the country. 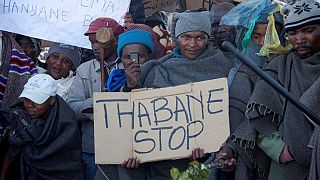