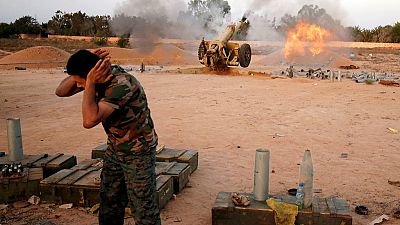 The United States carried out its first airstrike on the Islamic State stronghold of Sirte in Libya. Sirte is located some 450km east of the capital,Tripoli.

This was confirmed by the Prime Minister of Libya’s United Nations (UN) backed unity government, Fayez Seraj in a statement broadcast on state TV.

‘‘The first air strikes were carried out at specific locations in Sirte today causing severe losses to enemy ranks,’‘ Seraj is quoted to have said.

The first air strikes were carried out at specific locations in Sirte today causing severe losses to enemy ranks.

The pentagon also confirmed the strikes emphasizing that they were carried out on the instructions of the Libyan government. They were subsequently authorized by President Obama following a recommendation by defense chiefs.

Additional US strike against Islamic State will “enable the GNA to make decisive, strategic advance,” a Pentagon statement noted.

Forces aligned to the Tripoli based government have been battling Islamic State in Sirte since May.

The forces launched the offensive to retake Sirte on May 12. They entered the town held by IS for over a year on June 9. They were hampered by the strong resistance of the jihadists who fought back using car suicide bombings.

Since the beginning of operations, about 250 members of government forces were killed and over 1,400 wounded, according to medical sources in Misrata (200 km east of Tripoli), seat of the command of the military operation.

The IS had taken advantage of the chaos in which Libya was plunged since the fall of Muammar al Gaddafi to seize Sirte in June 2015. Gaddafi was ousted by French forces after a popular uprising in the north African country.