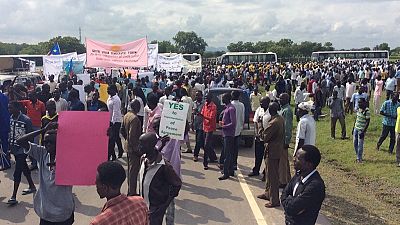 Residents in the South Sudanese capital of Juba are protesting against the possible deployment of additional troops to 12,000 United Nations peacekeeping force. Their action is in response to President Salva Kiir’s call for a peaceful protest in that direction.

The decision to deploy more troops to the country was necessitated by renewed heavy fighting between forces loyal to the president and his First Vice President Riek Machar. The deadly clashes were calmed after both leaders called for ceasefire last Tuesday.

Leaders at the just ended African Union (AU) summit in Kigali, Rwanda, backed the deployment of regional troops to South Sudan following the recent clashes. Soldiers for the continental force were to come from Uganda, Kenya, Sudan, Rwanda and Ethiopia.

There are over 12,000 foreign troops (UN) here in South Sudan, what do you need more forces for? What will they come and do? The UNMISS here has so many foreign troops. So we will not accept even a single soldier.

President Salva Kiir was categorical that his government would not accept the additional forces in the world’s youngest nation. “No. We will not accept even a single soldier,” Kiir stressed.

The Inter-governmental Authority on Development (IGAD) Council of Ministers met in Kenya on Monday and resolved that there was need for extra troops to back the UN mission in the young nation.

Preceding the IGAD, the UN Security Council had requested peacekeepers contributing nations to prepare their troops for possible deployment in South Sudan in order to avert a possible outbreak of violence in the conflict-hit nation.