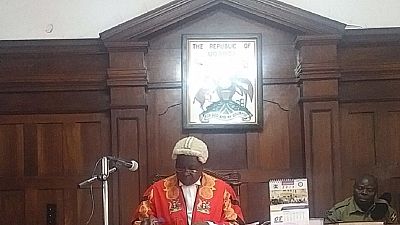 Uganda’s main opposition leader, Kizza Besigye, has applied for bail in his treason trial currently ongoing in a Nakawa Chief Magistrate court in the capital Kampala. The court adjourned and is set to give a ruling Tuesday July 12.

Thus court will make a ruling on Tuesday whether to grant bail or not. The applicant stays on remand till then pic.twitter.com/WRLVooPDsO

Among the reasons his lawyer gave for the application are; Besigye has been on remand since his arrest in May 2016; he was of advanced age (60 years); he had a permanent residence in Kasangati and was also ready to appear before the court as was required.

The State Prosecutor however appealed to the court to reject Besigye’s application stating that if granted bail, the Forum for Democratic Change (FDC) flagbearer would restart his defiance campaign.

60-year-old Besigye presented five sureties in respect to his application, all of whom the State admitted were substantial. The state added that stringent terms should be set if the court finds it fit to release Besigye because his activities that lead to breach of peace had to be stopped.

Dr Besigye was arrested, charged with treason and remanded after a video clip in which he (Dr Besigye) was sworn-in as president circulated online. A charge of disobeying lawful authority was earlier abandoned by the State.