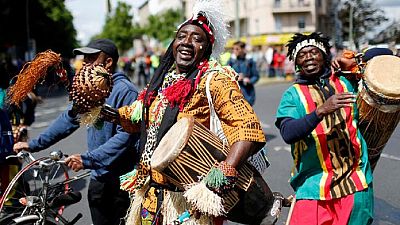 Ghanaian and Caribbean culture took centre stage at the weekend in the Ghanaian capital during the third edition of the Ghana Carnival.

Various parts of the Ghanaian capital Accra, notably James Town and the Black Star Square, played host to an array of performers who took part in the carnival which run from Friday July 1 to Sunday July 3, 2016.

The event which started as a private initiative with backing from the country’s Tourism Ministry, has grown into one many look forward to every year.

The event blends various cultures and traditions together with the modern creative vibe of Accra.

This year, masquerades, cultural troops and groups from South Africa, Togo, Nigeria and the La Brea Nightingales Steel Orchestra from Trinidad and Tobago took part in the 3-day event.

The event kicked off in ancient coastal James Town on July 1 with colourful events including beach parties, poetry recitals and paintings.

Whereas the day time was used mostly for the cultural displays, the evenings heralded jam packed sessions with various musicians including one of Ghana’s cultural ambassadors, Sherifa Gunu.

Ghana’s minister for Tourism, Culture and Creative Arts, Elizabeth Ofosu-Agyare was excited about the patronage of the event – a development she was hopeful would help the country re-position its tourism industry which is one of the country’s top foreign exchange earners.

She also expressed the desire to see a much larger pool of foreign participants at next year’s event.

“I’m thinking that next year we would start planning much earlier so that we can get a lot more people participating. We would also invite groups from the sub-region”.

The audience who had a great time at the event however asked organisers to make some few adjustments.

Lawson Orevam a Nigerian model said: “I think it’s been good so far but next time I think it will be better if the organizers have a meeting so that everything will be well structured.”

“People in the diaspora would want to identify with the Ghana Carnival so it is a step in the right direction” said Papa Gyate an African-American participant who also expressed the desire to see everything “flow from one thing to the other” so as to sustain the momentum of the event.

But the little challenges aside, it appears the Ghana Carnival has come to stay as organisers plan to spice up the regional performances by introducing some sort of competition and a prize at the end of the main carnival.