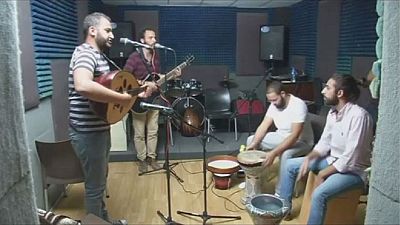 Egyptian artists and musicians are decrying lack of freedom of expression that is hindering what was once a flourishing sector.

Five years after the infamous uprising that led to the toppling of dictator Hosni Mubarak’s three decade regime, creative minds have all but disappeared from Egypt’s public spaces.

Abdelghany Sayed a backup singer with Baheya Band said, “The public space started getting smaller and smaller and now playing in the street has become very difficult – it’s not an option like before. So, we started looking for other places to play music. We started playing in music and gathering venues where people could come and listen to us.”

The public space started getting smaller and smaller and now playing in the street has become very difficult - it's not an option like before.

Since the current regime took office authorities have led an extensive crackdown on Muslim Brotherhood and liberal activists but they have recently broadened their net.

With limited freedom of speech, creative artists have expressed concerns after a number of writers and a cartoonist were charged for various crimes this year.

“Then he [an official] said, ‘fine, keep sitting here, and we’ll send you some thugs to make you leave’. Of course I heard that and couldn’t believe that it came out of an official’s mouth. Then I saw a man coming, I don’t know where he came from, he said (to the official), ‘don’t worry, sir, don’t worry, go back to your office and in a while we’ll throw glass cups at them. There were girls and boys all around. I didn’t want to get hurt that day, so I thought okay, if it’s going to get this bad, let’s not get hurt and let’s not fight, we’ll only lose,” said Khalil a member of Metrotune Band.

Human Rights Watch (HRW) has often criticised the North African country for its flawed judicial system and its campaign against activists and journalists.