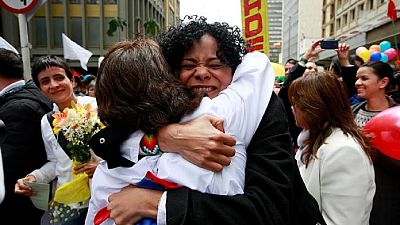 There was wild celebrations on the streets of Bogota as the Colombian government and the FARC rebels announced on Thursday, the signing of a historic ceasefire deal to end a 50-year-old civil war.

People hugged each other and sang the national anthem in the streets of Bogota.

Thursday’s announcement of the signing, marks one of the final steps towards a full peace deal in the country, 3 years after formal peace talks started in the Cuban capital, Havana.

The ceasefire is however not expected to start until a final accord is signed.

FARC leader, Rodrigo Londono, said during the announcement that “let this be the last day of our war”.

“We have reached the end of 50 years of death, attacks and pain” he said adding that “this is the end of the armed conflict with Farc”.

Both sides have agreed to let the courts rule whether a popular vote can be held in Colombia to endorse the deal.

Thursday’s announcement included a commitment of the rebels to down their arms within 180 days of a final peace deal, a provision that UN monitors will receive all the group’s weapons and the creation of temporary transition zones and camps for the estimated 7,000 rebels.

56-year-old Gloria Cuartas, a Bogota resident who said she had “lived in a state of war all my life” welcomed the announcement saying: “I am so excited and I have hope that the younger generation can enjoy the value of life every day”.

Another Bogota resident, Norman Mora described the announcement as a “transcendent step” explaining that “Columbia was the big pending issue, the exception in Latin America. And now it’s together with Latin America in the construction of peace”.

The final deal, expected to be signed in July, will mark the end of the longest-running armed struggle in the western hemisphere.

Both sides still need to establish how the peace deal in its entirety will be implemented, verified and approved, reports the BBC.