Chile advances to the Copa America final despite storm delay 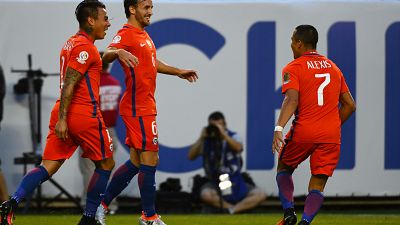 <p>Not even a torrential storm could stop defending champions Chile from reaching the the Copa America finals.</p> <p>The team beat Colombia 2-0, in the semi finals held on Wednesday night.</p> <blockquote class="twitter-tweet" data-lang="en"><p lang="en" dir="ltr">Bravo's Chile through to Copa America final, where Messi and Argentina are waiting for revenge <a href="https://t.co/Q6N1nM0xXm">https://t.co/Q6N1nM0xXm</a></p>— <span class="caps">SPORT</span> English (@Sport_EN) <a href="https://twitter.com/Sport_EN/status/745943596679954432">June 23, 2016</a></blockquote> <script async src="//platform.twitter.com/widgets.js" charset="utf-8"></script> <p>Early goals by Charles Aranguiz and Jose Fuenzalida staked the Chilean side to an early lead though Colombia created their fair share of chances.</p> <p>However, the second half was delayed by nearly three hours after the stadium was drenched with rain.</p> <p>The Colombians will now play hosts the United States, in the third-place play-off on Saturday. </p> <p>Chile will face Argentina in the finals to be held in New jersey on Sunday.</p>