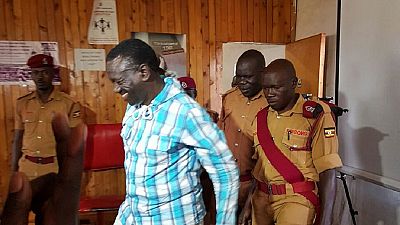 Ugandan opposition leader, Dr Kizza Besigye has finally appeared before the Kasanangati Magistrate’s court, this comes after the court ordered that his trial would be in the court contrary to a request for it to be held in the Luzira prisons where he is being held.

The Forum for Democratic Change (FDC) leader is facing charges of treason after he decided to swear himself in as president with days to the official swearing-in of president Museveni after the February polls.

Uganda’s Daily Monitor reports that security has been tightened around Kasangati Magistrate’s Court.

Supporters of FDC filled Kasangati court presided over by Mr Freddy Egessa to hear court proceedings which will include the state tabling more evidence to pin the four time challenger of president Yoweri Museveni.

The Magistrate Court, Kasangati is still in session. pic.twitter.com/Wa7AheSeDp

The Monitor continues to state that the State was preparing to show video evidence over how Besigye disobeyed lawful orders and didn’t follow prescribed route to Najjanankumbi.