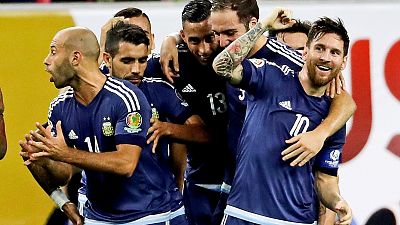 Argentina progressed serenely into the Copa America final on Tuesday.

The team thrashed hosts United States 4-0 to ease into the finals before a crowd estimated to be slightly over 70,000 people.

This is the 5th time that Argentina has made it to a #CopaAmerica Final. The last time they won was in 1993. pic.twitter.com/9RZrVXQkiH

The American home advantage counted for nothing against Lionel Messi, who netted a sensational free kick that counted as his 55th international goal leading him to become his country’s all-time top scorer .

Argentina dominated the first half and Messi’s goal was just a reward for their superiority.

“I am happy to have surpassed Batistuta’s record and I want to thank my team mates, it’s theirs as well,” said Messi.

The result means Argentina have scored 18 goals in five games and conceded just two, as they power towards what they hope will be their 15th Copa America title, and the first since 1993.

The team will face either Colombia or reigning champions Chile who will meet in Chicago on Tuesday.