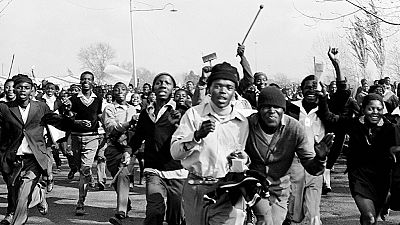 Note: The writer by piecing together events of the three pivotal days of the Soweto uprising is largely presenting accounts as related by eye witnesses, by journalists and also accounts of the apartheid government.

The morning of June 16, 1967 started out as a normal school day in Soweto. Whereas some students knew about the planned protests against the Bantu Education System and the Afrikaans directive, others had absolutely no clue.

Brothers and Sisters, I appeal to you - keep calm and cool. We have just received a report that the police are coming. Don't taunt them, don't do anything to them. Be cool and calm. We are not fighting.

Accounts by survivors say, the organizers of the march, the Action Committee of the Soweto Students Representative Council (SSRC) used two main Soweto schools in respect of the mobilization of students. (the Naledi High in Naledi and Morris Isaacson in Mofolo) The ‘peaceful’ protest was to end at the Orlando Stadium.

At the Nledi Secondary School, the headmaster addressed students as well as first chairperson of the Action Committee, Tepello Motopanyane tasking them to be discipline and that a peaceful march was to be the order of the day.

Same is reported in the case of Morris Isaacson Secondary School where one of the leaders of the Action Committee, Tsietsi Mashinini addressed students. Reports indicate that some students joined the group after getting off trains at the main station whiles others were recruited on the spot to be part of the march.

Meanwhile students in other schools had heard of the intended / ongoing action and had voluntarily joined. As a result of the rather segmented nature of the protests hoping to converge at some point, reports of minor skirmishes had come through in some places.

It is reported that Tietsi Mashinini had climbed onto a tractor to further assure students that it was a peaceful protest and should remain as such even after the police (who were on their way) arrived.

He is quoted as saying, ‘‘Brothers and Sisters, I appeal to you – keep calm and cool. We have just received a report that the police are coming. Don’t taunt them, don’t do anything to them. Be cool and calm. We are not fighting.’‘

Truly, the police did arrive. Before students could reach the final rallying point of the Orlando Stadium, they were blocked by the police. No account till date reports of students trying to force their way past the armed police.

The police account however says that the situation was explosive and they had called for reinforcements. The students kept marching till they got to Hector Petersen Square, close to Orlando High School, where there were blocked again.

At some point, (perhaps the turning point) a tear gas cannister was fired briefly dispersing the main group of students, they retreated as a result of the fumes but still faced the police chanting slogans of defiance.

Before long, a police pulled out a gun and fired a shot. That single shot, that bullet and the young man it hit and killed, sparked off a reaction. A reaction that resulted in what South Africans today celebrate as National Youth Day.

The police would continue their armed clampdown especially as the protest kept spreading across the Soweto township. On their part the police reported that the reprisal attacks by the students were targeted and thereby their use of force was also justified.

It wasn’t long before heavily armed police vehicles known as Hippos began streaming into Soweto in the evening sensing the volatile nature of the situation, official figures indicated that 23 protesters had been killed but the figure was pegged at around 200 by other sources.

There was enormous police presence on the morning of the 17th an estimated 1500 police armed with sten guns, automatic rifles, and hand machine carbines had taken up strategic positions in the township. Helicopters flew overhead. The army was on standby.

The police force seem ready to stick to the use of live bullets. The police on the second day shot at people as the day before and casualties were even higher. Yet, in all of this, the violent reaction of the police only made the protesters angrier.

More young people learning of what had happened joined the march voluntarily, the sense of knowing that their action could result in being killed, yet daring to hit the streets pointed to the intent of the protesters.

At a press conference, an official of WRAB, Mr. Manie Mulder, announced the extent of damage cause, he said nearly all the WRAB buildings (some 21 offices) in Soweto had been burnt down, 10 of them were plundered, 3 schools burnt as well as unknown numbers of municipal halls, beerhalls, bottlestores.

Thousands of workers had refused to go to work. The looming crisis for the Apartheid government was deepened by an impending visit to South Africa by the then US Secretary of State, Henry Kissinger.

To add to this, some 300 predominantly white Witwatersrand students staged a solidarity march through the Soweto city centre to protest the killing of schoolchildren. As they marched through the streets they were joined by many black workers. Day two ended in a tense ambience.

This day, the third of the protest was summarized by Sahistory.org.za as follows; ‘‘On the third day of the Uprising 18th June, the situation in Soweto was still volatile. Outside butchery in Moroka there were some fatalities.

Fires were blazing in many Soweto townships, like Zola, Ikwezi, Moletsane, Naledi and Tladi. Administrative buildings, wine stores and beer halls, which were hated by the young people, were also set on fire.

Buses and cars running through Soweto were burned. Police intensified their terror in trying to return the situation to normality in the township. However this angered the insurgents young people and brought them up against heavily armed police.

They used stones to counter armoured police cars, helicopters and guns. At about 10 a.m the chairman of the West Rand Administrative Board (WRAB) Manie Mulder was in Soweto to asses the situation.

He was escorted by a large police vans. All the WRAB owned cars that had escaped being burned were taken out of Soweto after Mulder’s visit. The columns of cars drove past Orlando police station into the direction of Johannesburg.’‘

The protest spread, the exiled political groups cashed in by calling for international condemnation of the armed crackdown, the currency had fallen in the wake of the attacks, the attacks more importantly had spread to other parts of the country.

It happened to be the beginning of the end of the apartheid regime. A regime that older systems and structures failed to ‘fight’ had been muscled and shaken by a group of secondary school student protesters.