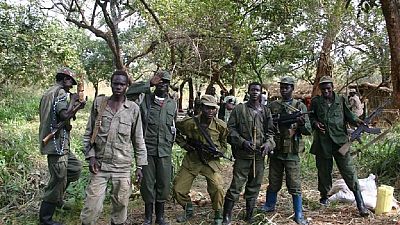 The United Nations has said that the the Lord’s Resistance Army rebels have stepped up attacks and abductions in the Central African Republic, in the first three months of this year.

UN’s concerns come after reports emerged on Wednesday that the rebels had kidnapped 29 people from two villages in CAR this week. The UN also raised concerns over Ugandan military plans to withdraw its anti-LRA troops from the region, saying that the withdrawal will further complicate the manhunt for an infamous warlord, Joseph Kony.

The rebel force which is originally from northern Uganda, has gained international notoriety for murdering, raping and kidnapping thousands of civilians.

A military offensive however pushed them out of Uganda in 2006, and today, they roam a poorly policed area straddling the borders of CAR, DRC and South Sudan.

What we want at this stage is to create conditions whereby Lord Resistance Army is unable to recruit, unable to refurbish its arms as it were.

The latest U.N. report to the Security Council, citing LRA Crisis Tracker data, said the rebels were responsible for 42 incidents, six civilian deaths and 252 civilian abductions in Central African Republic in the first quarter of 2016.

This compares with 52 incidents, five civilian deaths and 113 civilian abductions for all of 2015.

According to the report, the LRA “has demonstrated increased boldness.” It also said the surge could be attributed to the dry season and some LRA groups operating independently from Kony’s command.

Uganda leads a U.S.-supported African Union regional task force tracking the LRA rebels, but said last week it plans to withdraw its troops by the end of the year.

Most of its soldiers are in eastern Central African Republic, while a smaller contingent is based in South Sudan.

A special representative of the UN Secretary General warned that a withdrawal would create a vacuum that would allow the LRA and other armed groups to thrive.

“What we want at this stage is to create conditions whereby Lord Resistance Army is unable to recruit, unable to refurbish its arms as it were. And the opportunity offered by the withdrawal planned by the Ugandan Army from the region of Obo, where it operates, give an opportunity of the LRA to try to show its strength. So the international community should not allow this,” he told reporters.

CAR is itself trying to put years of violent turmoil behind it.

The nation voted in a new president in February after suffering the worst crisis in its history in early 2013 when mainly Muslim Seleka fighters toppled president Francois Bozize.

Christian militias responded to Seleka abuses by attacking the Muslim minority. A fifth of the population have fled their homes, either internally or abroad, to escape the violence, leaving the impoverished country divided along ethnic and religious lines.