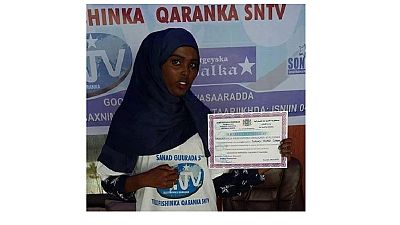 She is the second journalist to be killed in six months after Hinda Haji Mohamed who also worked for the state media was killed in a car bomb in Mogadishu in December 2015.

The reason behind her murder is unknown as no one has claimed responsibility for the attack.

The Secretary General of the National Union of Somali journalists told VOA that “Sagal Osman was gunned down by unknown assailants in Hodan District as she was leaving a local university … the gunmen fled from the scene immediately”.

He condemned the attack on called on the government to bring those behind it to book.

Somalia’s president Hassan Sheikh Mohamoud has condemned the murder in a statement saying the perpetrators will be brought to justice and held accountable.

The United Nations Assistance Mission in Somalia (UNSOM) has also condemned the attack on their twitter page calling for the apprehension of the perpetrators.

The young journalist was a producer and anchor for some youth related programmes on SNTV and radio.

Somalian journalists have been a target of attacks by the Islamists group al-Shabaab who aim to topple the Western-backed government.

On Wednesday, June 1, at least 10 people were killed and dozens more injured after al-Shabaab fighters set off a car bomb at the premises of the popular Ambassador Hotel in Mogadishu.