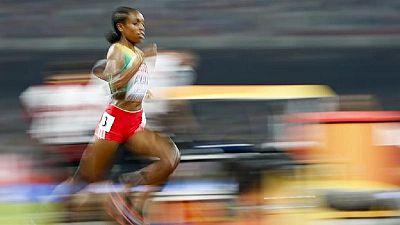 Ethiopia’s Almaz Ayana ran the second fastest women’s 5,000 metres in history as she missed out on the world record by just over a second at the Rome Diamond League on Thursday.

The world champion finished more than 20 seconds ahead of Mercy Cherono of Kenya in 14.12.59 but failed to break the 14.11.15 set by compatriot Tirunesh Dibaba eight years ago.

The time was slower than a meet record of 9.75 seconds set last year.

Gatlin ran 9.93 seconds ahead of Webb (9.94) and European record holder Jimmy Vicaut (9.99) of France, the only three to dip under 10 seconds at the Olympic Stadium.

Rising prospects Webb had the consolation of having earlier coasted to victory in the 200m race in 20.04 seconds.

World champion Wayde Van Niekerd of South Africa won the men’s 400 in 44.19 seconds while compatriot Caster Semenya equaled her world leading time this year in the 800 meters with a comfortable victory in 1.56.64.

Olympic and world champion Greg Rutherford of Britain won the long jump with a season’s best of 8.31 metres, the mark he registered to take gold at London 2012.

Triple jumper Caterine Ibarguen of Colombia extended her winning sequence to 34 with a leap of 14.78 metres ahead of Olga Rypakova (14.51) and Shanieka Thomas (14.46).