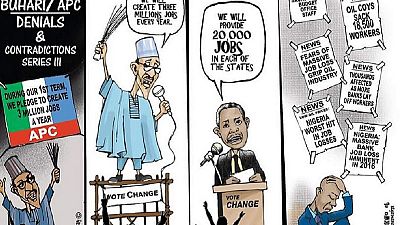 We are starting a series this morning titled: “How president Buhari ruined Nigeria in just 1year”. #Change

The series of cartooned photos that they posted on their official twitter handle were titled ‘‘How Buhari ruined Nigeria in just 1 Year,’‘ the 50 photos spanned from issues of insecurity, selective fight against corruption, a failing economy, failed promises and hard and high cost of living.

Beyond the government, the well composed pictures accompanied by the hashtag #PMBWasted365Days also too a swipe at the All People’s Congress (APC) which brought Buhari to power.

Among other issues, that the APC was reneging on all the campaign promises that brought them to power, specifically citing a 5000 Naira stipend that the APC had promised to pay to unemployed Nigerian youth and the ‘failed’ promise of providing 20,000 jobs for the youth.

They mocked the change mantra that brought Buhari and the APC to power as a trojan horse made of the party’s ‘‘broom’‘ emblem but one that brought with it suffering, high cost of living, poor electricity supply, non payment of salaries and job losses.

Other pictures chided the president for not doing enough to deal with alleged attacks by Fulani herdsmen who are reported to have invaded the country’s southern states and being involved in a spate of killings.

The country’s currency, the naira, was another area that PDP averred that Buhari had failed, further positing that the Nigerian leader’s forex rules had led to a thriving black market whiles locals suffered.

President Buhari marked a year in office after taking over the reigns of government from President Goodluck Jonathan. Whiles the presidency are counting their gains in putting Nigeria on the road to recovery, the opposition thinks Africa’s most populous country is in reverse gear.

One area that they did not touch on was the war against insurgency in the North-East of the country, where hitherto the swearing-in of Buhari was a free play field for Boko Haram militants.

PDP had ruled Nigeria since its return to democratic rule in 1999, winning all of the last four elections that comprised of two terms for Chief Olusegun Obasanjo, a term for the late Umar Musah Yar-Adua (completed by Goodluck Jonathan) and one full term by Jonathan who handed over power to Buhari on May 29.