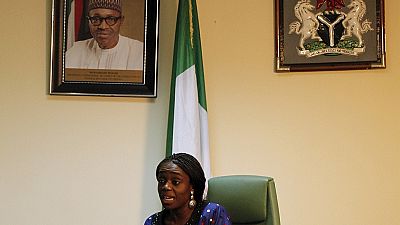 The Federal Government of Nigeria says it expends over $828 million (N165 billion) on salaries and allowances every month.

This was disclosed by the Minister of Finance, Mrs. Kemi Adeosun, on Tuesday in Abuja. She bemoaned the continuous leakages and wastages that have bedeviled the payment system of Africa’s largest economy.

She was speaking during a meeting with top brass of some quasi-military agencies under Nigeria’s Interior Ministry, the meeting was centered on continuous audit and migration from manual to automated payment system.

We have to make sure that those allowances are paid directly to those concerned and the best way to do that is by automating the pay roll system.

According to her, the manual to automated migration of personnel under the Ministry of Interior, was in line with President Buhari’s directive that everybody working under the Federal Government should be enrolled into the automated pay roll system by the end of the year.

“Both teams are working very hard on how to meet the deadline. This meeting is really on how to discuss the modalities and specifically, the number of allowances (non-credit allowances).

“We have to make sure that those allowances are paid directly to those concerned and the best way to do that is by automating the pay roll system, which is linked to BVN, so that every payment will be go to individuals specifically, rather than withdrawing them,” the Vanguard online portal quoted her as saying.

Nigeria is Africa’s largest economy which in the past relied heavily on oil proceeds, but with the global slump in oil prices, Nigeria has recently resolved to diversify its economy away from oil.

The country is slipping into recession according to some analysts, and the Central Bank was recently forced to relax its forex rules whiles the curency, Naira, remains devalued because of the President’s hard stance on the issue.