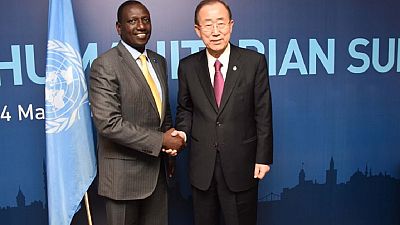 In spite of calls from rights groups and the international community, Kenya is set to go ahead with its planned closure of the world’s largest refugee camp – the Dadaab camp.

The country’s deputy president William Ruto who is attending the World Humanitarian Summit in Istanbul, reiterated the country’s stance that the facility which hosts Somalis displaced by decades of war in their home country, will be shut down because it poses an “existential security threat”.

“When we say the refugee camps pose an existential security threat to Kenya, we have facts, we have figures and we can demonstrate that is indeed the case. That is why we expect the international community to work with Kenya in the framework of the tripartite agreement to expedite the repatriation of these refugees back home because we believe that they can make huge contribution in their home back in Somalia.”

When we say the refugee camps pose an existential security threat to Kenya, we have facts, we have figures and we can demonstrate that is indeed the case.

But no country can shoulder humanitarian responsibilities at the expense of security of her people. pic.twitter.com/Dhp2hHAlWd

In November 2013, Foreign Ministers from Kenya and Somalia as well as the UNHCR signed a tripartite agreement for the repatriation of Somalis living in the Dadaab camp, but very few of them signed up for the voluntary repatriation.

After the Westgate Shopping Mall attack of 2013 and the attack on the Garissa University in 2015 which killed some 148 people, the Kenyan government threatened to close the camp where it believes the attacks were planned.

On May 6, 2016, the Kenyan government again announced that it would close the Dadaab and Kakuma refugee camps.

The United Nations and Western states have advised against forcibly repatriating the over 350,000 Somalis living in the sprawling Dadaab camp as it would violate international obligations.

Egypt’s ambassador to the United Nation, Abdellatif Aboulatta, who led a UN delegation to meet the Kenya authorities last week said a possible closure of the camp cannot be ruled out as it is believed to be a breeding ground for many terrorists.

“It is not about finance. Yes of course there is some financial problem, of course, but it is also about terrorism. There might be a link to some radicalization inside these camps and we understand it, of course, again the challenge of terrorism is real and it is important to take it into consideration” Aboulatta told the media at the weekend.

Ruto in an interview with Reuters also said the international community had failed Somalia which is still struggling to recover from the anarchy of the 1990s, arguing that Kenya has spent $7 billion on Dadaab over the past quarter of a century.

The U.N. refugee agency UNHCR said in January it might miss a 2016 target to repatriate 50,000 refugees as the Somali government battles the al Shabaab insurgency and there are few public services for returnees.

Somalia is slowly rebuilding and is due to elect a new parliament in August.