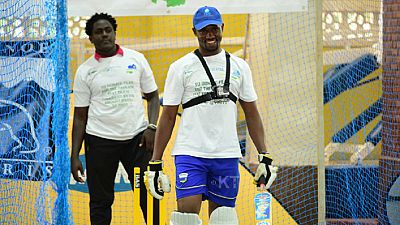 The event was attended by Rwanda’s minister of sports and culture, Julienne Uwacu and some participants of the World Economic Forum on Africa going on in Kigali.

Dusingizimana has therefore replaced an Indian, Virag Male who held the last record after batting for 50 hours.

Dusingizimana thinks more should be done to improve the state of the cricket game in Rwanda.

“We need to build the future of cricket in Rwanda, set up good cricket facilities as well as help improve the sport’s image on the international stage. I will not give up till the last ball,” he said.

Dusingizimana started playing cricket in 2006 with Right Guards and has played for Young Tigers, Impala Titans and Dugout CC.

Dusingizimana has helped Rwanda to win the ICC division III tournaments in Accra in 2011.