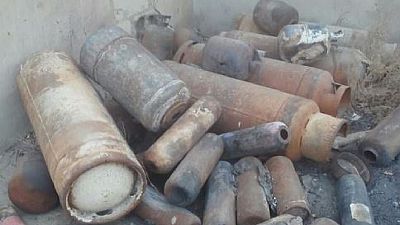 In its sustained crackdown on remnants of insurgents in Nigeria’s north east, the army reports that they have ‘‘succeeded in bursting a secret Boko Haram terrorists Improvised Explosive Making Device factory in Ngala town, north eastern Nigeria.’‘

This information was contained in a press release signed by Colonel Sani Kukasheka, the Acting Director of Army Public Relations.

Aside killing some Boko Haram terrorists, ‘‘In addition, they recovered 20 gas cylinders of various sizes prepared and ready for explosive insertion, primers, gun powder, electric wires and tape recorders, amongst other items,’‘ the statement read in part.

In addition, they recovered 20 gas cylinders of various sizes prepared and ready for explosive insertion, primers, gun powder, electric wires and tape recorders, amongst other items.

According to the release, the latest victory chalked in the Ngala town in Borno State was ‘‘thanks to the efficient intelligence and resilience of the troops.’‘ The Army further asserted that with the disbanding of the weapons making factory, they expected a further fall in the group’s attacks on soft targets as has been the case in the recent past.

The army assured citizens that the troops engaged in the insurgency combat codenamed Operation Lafiya Doole (meaning ‘Peace by all means possible’) remained committed to ridding the country of terrorists.

The Boko Haram insurgency has ravaged large parts of Nigeria’s northeastern state of Borno and has also affected adjoining Adamawa and Yobe States. The insurgents have been on the pack foot since the coming into office of incumbent President Muhammadu Buhari.

An equipped army has waged a relentless combat on them, with the government claiming a technical victory’ over the insurgents by its own deadline give last year. The group has been pushed back in several areas that it held and hoisted its flag years back.

The activities of Boko Haram has had a regional dimension in the Lake Chad region, affecting Chad, Cameroon’s Far North regiona and Niger. The insurgents’ activities have led to the loss of thousands of lives while millions have been displaced.