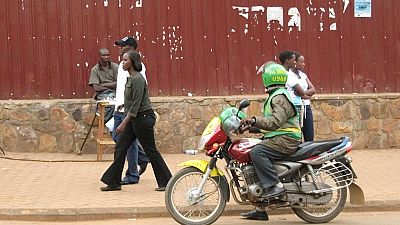 Across Africa, motorcycle taxis, known as moto in Rwanda, boda-boda in Kenya and Uganda or okada in Nigeria, are a popular method of transport.

On a motorbike, you can weave through gridlocked traffic, dash down side alleys or bump over dirt shortcuts, all for a fraction of what you would pay for a taxi.

Although low and middle-income countries have only around half the world’s registered vehicles, they account for 90% of global road traffic deaths.

Based on this information, the app is able to define the habits of the driver to advise on when to slow down, warn if it is speeding or indicate the ideal speed to embark on during peak hours.

Motorbike taxis offer a relatively capital-light way to start a business, but the sector is notoriously unregulated. In Kigali, reports say that 80% of the traffic accidents in Rwanda are caused by motos.

In an attempt to address this scourge, SafeMotos, an mobile phone application has emerged as an alternative.

Co-founded by Peter Kariuki and a Canadian, Barrett Nash, SafeMotos is now a reality with more than 40 drivers on its books.

“Within ten seconds while being driven on a motorcycle you will get to know if your driver is careful or not. SafeMotos make individuals and motorcycle taxi drivers equip their smartphone application that advises in real time on the risks they face,” says Kariuki who also has plans to expand the technology into Uganda, Cameroon and beyond.

“Based on this information, the application is able to define the habits of the driver to advise on when to slow down, warn if it is speeding or indicate the ideal speed to embark on during peak hours,” Kariuki adds.

SafeMotos have devised ingenious ways to only support drivers to accurately find their fares which take account of driver behaviours, but also that meet the needs of the customer. The app have mapped thousands of landmarks in and around Kigali and linked these to GPS coordinates.

This means that when someone requests a pick up, SafeMotos can map their GPS location, and translate this to an appropriate landmark in the city. Drivers can then find their pick-ups in the way they would expect as SafeMotos can understand the exact location that people are requesting motos from.

Drivers who want to take part are given a smartphone and SafeMotos installs an app that records their speed, acceleration, GPS and gyroscope information. This is then fed back to servers that analyse the raw data and come up with an overall safety score. To stay on the books, drivers must achieve a rating of 90 or more out of 100.

Customers join the scheme by downloading the Uber-style app that guarantees a SafeMoto driver will come to pick them up.