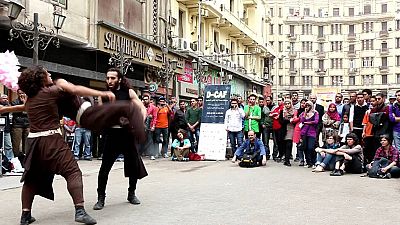 Egypt having a rich culture, steeped in centuries old tradition is no push over.

But the new generation of Egyptians are spicing up their culture with a dash of modernity.

And there was plenty of that at the Downtown Contemporary Arts Festival (D-CAF) held recently in Cairo.

My dance represents an endless circle. Like my whole life seems repeated. I'm trying to get out of this circle. I fall, I rise again and I feel drained. Yeah, that's life.

Billed as the largest international event of its kind in the north African nation, the fifth edition of D-CAF showcased a wide array of contemporary dance, theatre, music, film and literature.

.DCAFEgypt is in full swing. Here's why culture really matters for development in #Egypt: https://t.co/8zkIwJMpso

One of the highlights of the show was a dance performance by Nagham Salah, created with Egyptian choreographer Shaymaa Shoukry.

Moving first to slow music, mostly from string instruments then to mid tempo beats, Nagham’s dance suggests difficulty one has in moving out of perhaps a comfort zone.

“My dance represents an endless circle. Like my whole life seems repeated. I’m trying to get out of this circle. I fall, I rise again and I feel drained. Yeah, that’s life,” she explained.

Choreographer Shaymaa Shoukry who put Nagham’s dance together said: “We’re trying to see the human-being from different perspectives, to say that a person can’t be described based on one feature. Things aren’t always black or white, men or women.”

“Each one of us has a closer circle and a wider and distant one, some see me differently from others,” she added

Nagham’s performance was well received by the audience. But she was not the only one to have won the admiration of the spectators.

“Studio Stella”, one of the newest pop sensations in Egypt, known for the eclectic mix of musical styles and influences, was also on hand to thrill the festival goers. And they succeeded in keeping them on their feet and moving to their rhythms.

For the festival’s organisers, D-CAF is all about breaking new ground.

“Each year we invite different artists, and we have different shows. It depends on what’s being presented worldwide. Our target is to always explore new places, new performers and so on.”

But what would an Egyptian celebration be without a touch of tradition? This was provided by Abdelbaset Hammouda, a legend of Egyptian Shaabi music.

Amid political and social instability, this festival is all about embracing modernity – and promoting basic rights and freedom of expression.