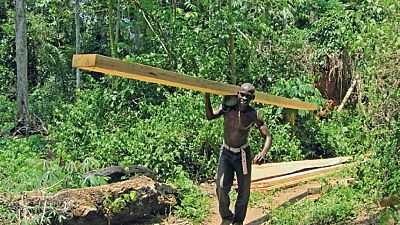 Gabon has created an economic hub outside Libreville in moves to industrialize its wood industry.

Government figures indicate that the zone known as the Nkok Special Zone which employs over 7000 people, occupies an area of 1,126 hectares and has brought in over $192 million.

Environmentalists have warned that enough should be done to protect trees and encourage the growth of the industry in a sustainable manner.

The industrialization of the wood sector has in my opinion increased the illegal exploitation of wood.

Rare tree species like the Kevazingo tree can take about 500 years to grow to a full height of 40 metres.

Officials have been working on ways to reduce illegal logging despite the introduction of reforms such as export bans on unprocessed timber.

“The industrialization of the wood sector has in my opinion increased the illegal exploitation of wood. For example, today even though a law regarding forestry is being reviewed, we continue to see the exploitation of rare wood such as Kevazingo. We are currently experiencing levels of illegal logging that we have never seen before,” Marc Ona Essangui, an environmental activist said.

A sharp drop in the price of oil which accounts for close to 80 percent of Gabon’s earnings encouraged the new investments.

The government is relying on wood, manufacturing and tourism industry for the country’s growth by 2025. Finding labour in expanding fields remains the biggest challenge in Gabon.

“We are currently facing economic challenges, just like many oil exporting countries. We are struggling with a slump in oil prices, but this is where we need to be creative. This is where we need to come up with solutions, as we try to move towards industrialization. We want to put in place policies that will enable Gabon to diversify its economy,” Gabon’s Minister of Economy Régis Immongault said.

President Ali Bongo Ondimba has been keen on encouraging the wood sector since 2010 when the exportation of raw timber was banned. He believes his country can easily adapt to the changes.

“In order for industrialization to play a big role in diversifying our economy, certain measures have been taken, especially in the wood industry. We have set up a national timber fund, which will play a role in ensuring that there is fluidity and a good relationship between customers and suppliers, as well as other players in the industry. The fund will also ensure all wood for exports are certified with Gabonese timber labels,” Ali Bongo said.

The biggest challenge so far will be the ability to find labour in the expanding field as Libreville hosts only about 500, 000 people.