Former Bosnian Serb leader, Radovan Karadzic has been convicted of genocide in the 1995 Srebrenica massacre.

He has subsequently been sentenced to 40 years in prison for his role in the worst war crime in Europe since the second World War.

Karadzic was tried by the International Criminal Court (ICC) in The Hague on 11 separate war crime charges dating back to the 1992 Bosnian war.

The Chamber finds that the accused knew or had reason to know that crimes had been committed by his subordinates in the aftermath of the fall of the Srebrenica enclave.

“Accordingly, the chamber finds that the only reasonable inference available on such evidence is that the accused shared with [Ratko] Mladic, [Ljubisa] Beara and [Vujadin] Popovic the intent that every able-bodied Bosnian Muslim male from Srebrenica be killed, which the chamber finds amounts to the intent to destroy the Bosnian Muslims in Srebrenica as such,” read O-gon Kwon, one of the judges at the ICC.

The three-member judging panel said Karadzic was head of the self-styled Bosnian Serb Republic as well as the Supreme Commander of its armed forces, when the crimes were committed by his troops.

“The chamber finds that the accused knew or had reason to know that crimes had been committed by his subordinates in the aftermath of the fall of the Srebrenica enclave and that he failed in his duty as supreme commander to take necessary and reasonable measures to punish the commission of genocide, murder, extermination and killings as an underlying act of persecution. He is therefore criminally responsible for such failures pursuant to Article 7.3 of the statute,” the judge noted.

But in a blow to thousands of other victims, Karadzic was acquitted of the first count of genocide in seven Bosnian towns and villages.

“Since the chamber has already found the accused responsible for genocide on the basis of his participation in the Srebrenica JCE (Joint Criminal Enterprise), the chamber will not enter a conviction pursuant to Article 7.3 of the statute in relation to count 2,” the court said.

Radovan Karadzic was arrested in 2008 after 11 years on the run, for his involvement in a war that killed more than 100,000 people.

His sentence will probably be reduced by at least 7 years due to the time he has already spent in jail. He is expected to appeal the decision but this might take several more years. 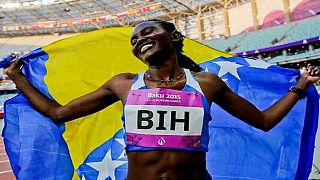