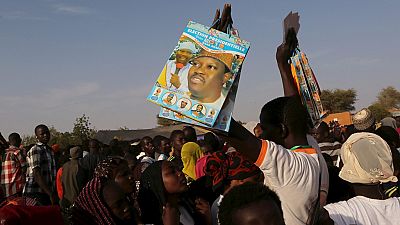 Niger opposition parties have rejected the final round of the country’s presidential and legislative elections that took place on Sunday citing fraud.

His rival Hama Amadou received less than 8 percent of the vote, which saw a low turnout after the opposition called for a boycott.

The people of Niger have massively rejected this sham of an election.

The candidates from the opposition parties in a statement have challenged any attempts by the incumbent President Mahamadou Issoufou to claim victory.

They have also accused the government of voter intimidation and warned of false results.

News24 reports that voter participation was a crucial issue in the Sunday’s runoff election following the opposition’s boycott call and the dramatic evacuation to France of Issoufou’s challenger, Hama Amadou.

“The people of Niger have massively rejected this sham of an election,” said the COPA 2016 opposition coalition.

The group claimed the voter turnout was a mere 11% nationwide, against the official estimate of 56%.

“The people responded positively to the boycott appeal,” the coalition statement said, calling on Issoufou to “draw the consequences of the people’s will.”

The election featured 64 year old Issoufou, a former mining engineer nicknamed “the lion” against Amadou, 66, a former premier and parliament speaker known as “the phoenix” for his ability to make political comebacks.

Despite large uranium deposits and other resources, Niger is one of the world’s poorest countries.

Apart from political turmoil, the landlocked country is under constant threat from al-Qaeda-linked fighters to the north and west, and Boko Haram in the south.