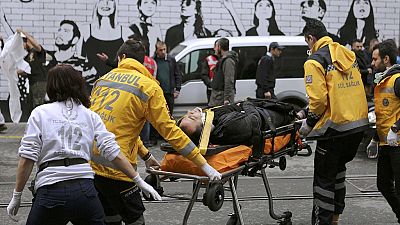 At least four people have been killed after a suicide bomber detonated himself in Istanbul, Turkey.

Dozens have been wounded with several nursing serious injuries, according to the governor of Istanbul, Vasip Sahin.

Today, a suicide bomber blew himself up in front of Beyoglu district governorship building around noon and killed three people and wounded 21 others.

The explosion was set off near a local government office on Istiklal Street, which is lined with several restaurants and international stores.

“Today, a suicide bomber blew himself up in front of Beyoglu district governorship building around noon and killed three people and wounded 21 others. Three of them were in critical condition. One of them has just died in hospital. A detailed investigation is being carried out by our colleagues,” Sahin said.

There have not been any immediate claims of responsibility. Even so, the European country has been on high alert after undergoing a spate of deadly terrorist attacks on its soil.

The blast occurs barely a week after a car bomb in the capital Ankara killed 37 people. The Kurdistan Freedom Falcons (Tak) claimed responsibility for the attack.

The militant group said that the attack was in retaliation for ongoing security operations in the predominantly Kurdish south-east. The insurgency group has vowed to carry out more attacks.