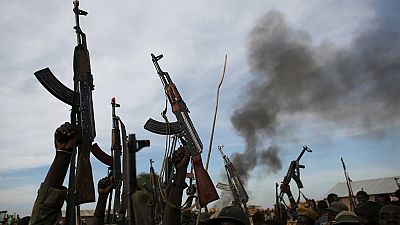 South Sudanese government soldiers killing more than 60 men and children by letting them suffocate in a cargo container in October 2015, is akin to war crimes, Amnesty International said on Friday.

In a report detailing what had happened in the grounds of a Catholic church in Leer, in the northern Unity State, the organization for the defence of human rights asked that the soldiers involved be prosecuted.

This crime was first revealed by the Ceasefire and Transitional Security Arrangements Monitoring Mechanism (CTSAMM), the body responsible for reporting on the implementation of the permanent ceasefire, in February.

The report is based on testimonies from 23 people who said they saw the victims pushed and force inside the container with their hands tied, and others who saw the body being removed and discarded.

“Witnesses described hearing the cries and screams of inmates who were hitting the walls of the freight container which, they say, had no window and no other form of ventilation,” said Amnesty International.

“They say the military and civilian officials were directly aware that detainees were distressed and dying, but they did nothing to help them,” the report added.

Relatives of the victims explained that it was “herders, traders, students, (but) not fighters,” according to Amnesty.

A witness said they saw soldiers open the container, remove four bodies, and then “closed the container again as the last prisoners were still alive inside.”

In its initial report, the (CTSAMM) said that those who had been found in the container were dead, and the only survivor was a boy of eight. The government denied all the charges.

“We could see the people inside and they were not alive….what we saw was tragic…the container was full of people. They had fallen over one another and on to the floor. There were so many people,” a witness told Amnesty International.

The bodies were then dumped in a vacant site, where Amnesty investigators found “the remains of several dismembered skeletons still scattered on the floor.”

South Sudan became independent from Sudan in July 2011 after decades of conflict with Khartoum. But the youngest country in the world plunged into civil war in December 2013 when President Salva Kiir accused his former vice president Riek Machar of plotting a coup.

More than 2.3 million people have been driven from their homes and tens of thousands killed by the war of which both sides are guilty of atrocities.

In mid-February, President Kiir reinstalled Riek Machar, who became the leader of the rebellion, as vice president, as part of the peace agreement signed in August 2015.

But fighting continues between the army and various rebel groups, often driven by local interests and do not feel subjected to written agreements.