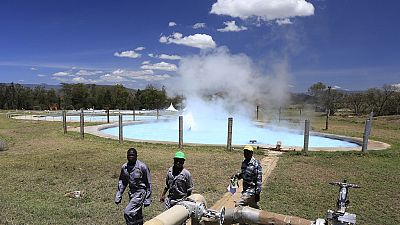 Kenya is now one of the world leaders in geothermal energy production, with 14 potential sites located in the rift valley.

“It is a clean energy, or green, because its carbon footprint on the environment is minimal,” an employee of Kenya Electricity Generating Company said.

Geothermal energy comes from a mixture of water and steam under pressure drawn from nearly 2 km beneath the earth.

It is a clean energy, or green, because its carbon footprint on the environment is minimal.

The pressure and heat separates water vapour from water when it rises to the surface which turns the turbines and produces electricity.

Only a third of 45 million Kenyans have electricity. For a long time, Kenya depended on its hydroelectric network but recurrent droughts have made this source of energy less reliable.

The Kenyan government has made access to electricity in the country one of its priorities and hopes to triple production by 2020 to compensate an annual increase of 11 percent in demand.

The potential distributed in 14 sites is estimated at about 10,000 megawatts in the rift valley of more than 6,000 kilometres.

“Geothermal energy can probably appear to be everywhere in the world. But what makes it more accessible here is that the crust is thinner, if although the steam can be out very easily,” Boniface Kipkorir, an engineer working in the site explains.

The installation of two new production units at Olkaria 120km to the North-West of Nairobi has doubled the production of geothermal energy to 609 MV.

Kenya now occupies the 8th position in the world in terms of geothermal energy with 5% of production.

Oklaria, located in the park of Hell’s gate is the largest production centre of geothermal energy in Africa.