SA: University students protest use of Afrikaans in lectures 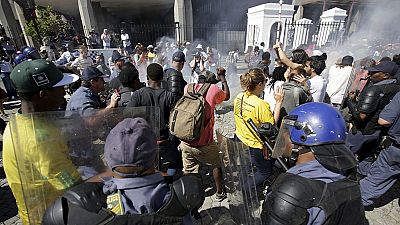 Students at one of South Africa’s top universities, the University of Pretoria are up in arms over the use of the Afrikaans language by some lecturers.

They boycotted lectures on Monday and many of them are reported to have gathered outside classes, saying English should be the only language of instruction.

Following days of often violent protests the university on Monday announced on its Facebook page the adoption of a new language policy.

“Following many queries, the University wishes to clarify that the proposed way forward on the language policy is that all lectures should be offered in English only.

“To promote multilingualism and student success, it is proposed that Afrikaans and Sepedi be used to provide additional support to students.”

Social media was abuzz with people weighing in on the matter. A video was circulated on facebook and twitter, showing a scuffle between the protesters and security personnel

Several students were arrested for protesting at the university’s Groenkloof and Hatfielf Campuses.

They were expected to appear before the Pretoria Magistrate’s court on Monday.