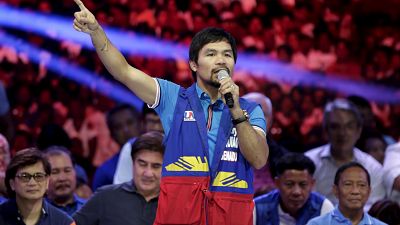 Eight-time world boxing champion Manny Pacquiao has apologised for comments he made on homosexuals.

The boxer had described homosexuals as “worse than animals”.

The 37-year-old, who is reinventing himself as a conservative Bible-bearing politician has had to come back to apologize following a backlash.

Pacman, as he is called, is running for Philippines’ May elections.

“I’m sorry for comparing homosexuals to animals. Please forgive me for those I’ve hurt,” Pacquiao said in a video post on Instagram with his arms crossed.

“I love you all with the love of the Lord. I am praying for you,” he ended.

I'm sorry for hurting people by comparing homosexuals to animals. Please forgive me for those I've hurt. I still stand on my belief that I'm against same sex marriage because of what the Bible says, but I'm not condemning LGBT. I love you all with the love of the Lord. God Bless you all and I'm praying for you.

Earlier, he told local television station TV5 that: “It’s common sense. Do you see animals mating with the same sex? Animals are better because they can distinguish male from female.”

Gay marriage is outlawed in the Philippines due to strong opposition from the Catholic church which is subscribed by 80 percent of the country’s 100 million people.

The country’s most popular gay comedian, Vice Ganda, later today hit back at the boxer.

“Some people think they can judge people like God just because they’ve attended a prayer meeting and read the Bible.” 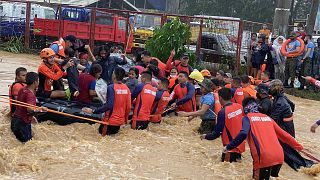