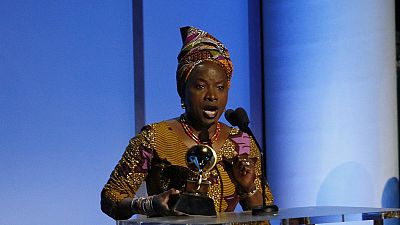 For the third time she gets to walk home with a golden gramophone – a status symbol indicating she’s one of the world music’s finest.

She won the Best World Music Album category with her album Angelique Kidjo SINGS, a collection of songs recorded with the Orchestre Philharmonique du Luxembourg.

This is the second consecutive win for Kidjo who won the same category in 2015 with her album ‘EVE’ – a tribute to African women.

She won her first Grammy in 2008 in the World Music Album category with her eighth studio album Djin Djin released in 2007.

Dashing onto the stage to receive her award and dancing to James Brown’s “I Feel Good” from the orchestra pit, Angelique Kidjo dedicated her Grammy to “all traditional musicians in Africa, in my country, to all the young generation”.

Thanks to my fans! I m dedicating my #Grammy to my fellow African artists and musicians! I love… https://t.co/sBotp3fJ3t

Her win however dashed the hopes of Malawi’s Zomba Prison band which was nominated in the same category as her together with 3-time Grammy winning South African group, Ladysmith Black Mambazo.