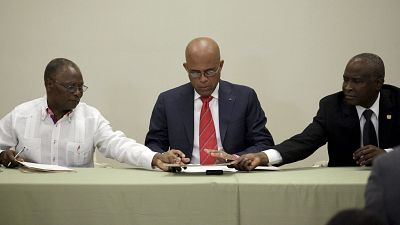 Haiti’s political deadlock was resolved on Saturday, after the country’s outgoing president , Michel Marterlly agreed to relinquish power to a transitional government.

Parliament is expected to elect an interim president for a four month term, which will decide the terms of the next round of elections.

Opposition candidate Jude Celestine last month refused to participate in the first round because of alleged ballot fraud which sparked violence by his supporters who demanded that the run off be cancelled.

Martelly, officially leaves office on 7 February. Following Celestine’s boycott, he rejected the idea of transitional government saying that will cause a political vacuum

Martelly acknowledged the process was not without bumps.
“At the end, when we negotiated we don’t always obtain what we wanted. But we had to make sacrifices to get this country out of this situation,” he said at the signing of the agreement.

Announcing the accord, Martelly called for peace.

“Regardless of this accord, everyone has to be vigilant. Because we have to realise that there are people who are not covered by this agreement. For that I call on the responsible parties to make every effort to maintain stability in this country. So all leaders, especially those who make use of violence, should understand that every time there is violence, Haiti takes a step backwards,” he said.

Haiti has struggled to build a stable democracy since the end of the brutal Duvalier family regime in the 1980s.